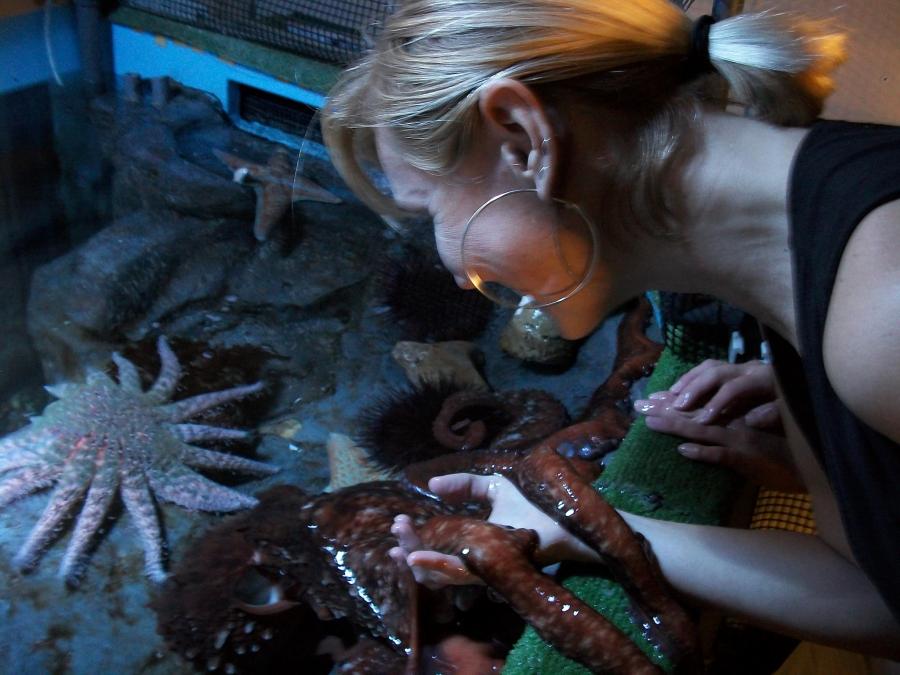 I’ve had the pleasure of meeting a GPO.

Not the GOP, I mean the GPO.  A Great Pacific Octopus, which is the largest octopus in the world.

Lately, there has been an explosion of support for the GPO, when a young man caught and killed a GPO in Washington state,  in a dive site renowned for being heavily populated by the octos.

What he did wasn’t illegal.  He had a fishing license, and he used his hands (apparently punching it in the head) because GPO’s can only be harvested by hand (the law).

I’ve had a very difficult time responding to this incident.  It was drawn to my attention on facebook a week ago.  I saw a picture of the majestic 80lb GPO draped in the bed of a truck, next to a smiling man in a wetsuit.  It made me feel sick.  A friend of a friend had posted the picture, to spread the word of this particular diver’s actions.  Not because what he did was illegal, but because what he did goes against the code of the diving community.

It’s lobster season right now.  Many of my friends are going out every night and collecting bugs for dinner.  There are laws that have be respected, but honestly, pictures of those smiling divers are not going viral on the internet. Why? I know other free divers who are spear fishers.  I know people who eat fish, octopus, and eels at sushi restaurants, why is this young man’s actions so awful?

Well, for one, he has given a face to the cause.  For another, he was a member of a community that has a spoken vow to protect the ecosystem we explore, because we are guests and we love it.  For another, he went about what he did with the wrong attitude.  In a quote, he says he took this great pacific octopus to draw it for an art project, and for it’s meat.  (the art project? a dead octopus on the surface is 100% less graceful than a live octopus in the water. The meat? I suppose, I’m not against supplying one’s own food, but…?).  This man was a trophy hunter.  And in the year 2012, the general population finds trophy hunters unattractive, wasteful, arrogant, and gross.

I don’t support the idea that people are threatening his family. His mother says people are valuing the life of an octopus over the life of a person.  I don’t condone violence, but  the more I think of it, the more I don’t value this young man’s life over an Octopus, or an eel, or a garibaldi.  Each organism on this planet has a place, and if that organism is willfully violent, disruptive, and wasteful, perhaps they have forfeited their place.  I have heard but not confirmed that they octopus this young man caught was a nesting mother.  It is known that nesting mothers will not abandon their eggs, which is perhaps why he was able to catch this particularly elusive creature.  One mother justifies her sons actions, for killing another mother.

What are your thoughts? Read more here, and see pictures.