All animals risk being anthropomorphized.  Fuzzy animals, like penguins, lion cubs, or meerkats get a good reputation.  Their actions are attributed to being familial and loving.

Animals that get a bad reputation, like sharks, tasmanian devils, rats, possums, get categorized as mean, deathly, not as deserving of attention or protection.  Pesks, vermin, killers.

It’s kind of a pity that I use the word anthropomorphized.  Like I am attributing value to an animal because of it’s resemblance to human nature, but I suppose it is human nature to find the similarities and love them because they make us the same.  Human nature is not very kind, it is animal nature, and we all just act in the best way that ensures survival.  There isn’t necessarily a good or bad stigma that should be attached to an animal, just because we’ve made it into a caricature. 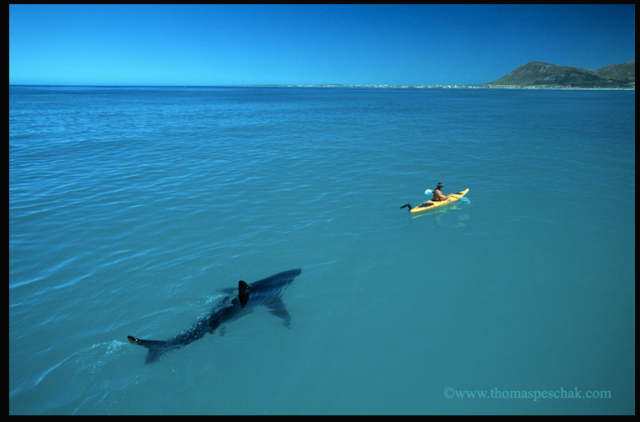 This photograph, by Thomas P Peschak looks menacing to some.

A white shark stalks a kayaker, while the kayaker looks nervously over his shoulder.

Or is that what is happening?

White sharks, known by some to be cold blooded killers, are known by some to be as inquisitive as kittens. Of course, the risk factor is higher when you are dealing with inquisitive white sharks than inquisitive kittens, but the idea is the same.  A foreign object comes into the territory or the vicinity of an animal like this, and his first instinct is not to attack, kill, or bite, but to follow at a short distance, to observe, and then to disregard and release.

“We believe that white sharks come inshore in such great numbers to socially interact with others of their species, perhaps even to mate or give birth to their young. We have observed sharks following behind or swimming tight circles around one another.”-Peschak.

Maybe it’s like having someone witness you eating Thanksgiving dinner and assuming that’s how you eat every single day.  Sure, it happens, but it’s rare, and there’s a lot more to you than just stuffing yourself full of turkey.

PS the new website is full of dust and needs mucho adjustment.  Thanks for your patience, I will get everything on track soon.