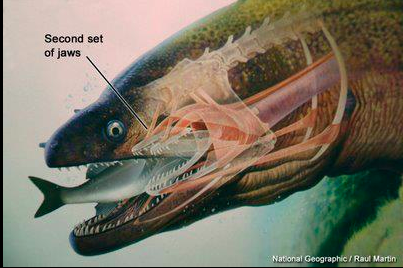 i have a habit of telling people not to touch wild animals.  sometimes in the ocean, people get overly confident.  I have a friend who is especially fond of petting things in the sea, and I’m always telling him “STOP TOUCHING THE ANIMALS!” and then he laughs.

but moray eels are not a laughing matter.  because moray eels have not only one set of jaws to getcha, but TWO.  You know who else has two sets of jaws?

It’s not that Moray Eels are especially aggressive.  My experience with morays seems to be that they like their nooks and crannies, and I keep my hands out of those nooks.

“In a series of experiments, scientists at the University of California, Davis, recently discovered that moray eels possess an extremely mobile set of jaws in their throat that they can project forward into their mouth to aid in feeding.”

But what’s the point though? Why have a second set of jaws, when one set of jaws is all that us people seem to need?

“Most fish catch their prey using a suction method. When food is within reach, a fish will rapidly open its mouth.

But, suction feeding has several restrictions. For one, the method limits the size of prey that a fish can draw into its mouth. The technique also requires room around the fish’s head to accommodate the space generated when it expands its mouth cavity.”

“This unique feature allows the eels to protrude their secondary jaws forward from their throats and into their mouths, where they grasp prey and guide it toward the esophagus.”  (side note, this is how I eat turkey sandwiches)

It’s not that rare to have PHARYNGEAL JAWS (WORD OF THE DAY DING DING DING!). about 30,000 fishes have these second set of jaws.  But Morays are unique because they may be, quite possibly, the only animals who are able to shove em forward and wiggle em around.  So, don’t pet them, in the off chance you startle one (they are not known for their excellent eye sight).

quotes cited from this SITE.