It’s Halloween, Merfolks, and Halloween parties abound.  In the spirit of spookiness, I imagined a Halloween party under the sea, and gave out awards for the spookiest sea creatures.

Viperfish certainly look intimidating, but it’s not just a costume.  Viperfish impale their prey on their long teeth by swimming at their prey with their jaws open.  When they close their jaws, their teeth overlap and curl behind their head.  It is widely believed that viperfish lure their prey by a light on their dorsal spine, which they flash on and off while waving back and forth as they remain motionless IN THE DARK.

You probably already knew that Octopus can change their color and their texture (even though they are widely considered color blind), but the Mimic Octopus actually disguises itself by pretending to be other fish! Instead of running and hiding, this Octopus hides in plain sight.  It can disguise itself with 15 different fishes, including banded sea snakes. Which is why I gave the Mimic Octopus the prize for Best Disguise. 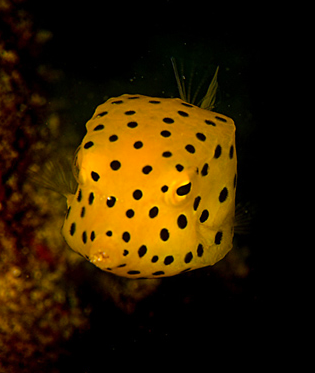 Every good costume contest has a category for cutest kids, and I nominate the Juvenile Boxfish.  Because who doesn’t love floating polka dot yellow peas? Although, Juvenile Boxfish also grow up to be one of the cutest fish in the sea too.

Lanternfish live down down down deep in the ocean.  In fact they comprise 65% of all biomass of deep sea fishes.  Lanternfish use bioluminescence to communicate with each other, and swim up the ocean column once the sun sets to follow the yummy zooplankton, only to return to the depths when the sun rises.  Meaning that Lanternfish don’t ever see the light of day!

Sea Creature You’d Least Want to Run Into Down A Dark Alley: The Anglerfish 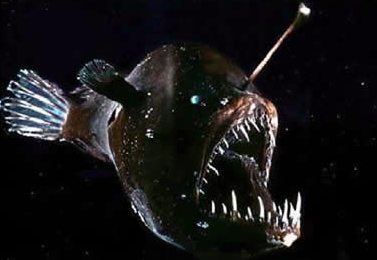 Commonly agreed as the most intimidating looking fish, and the fish that can’t seem to ever close their mouths all the way (due to the abundance of TEETH), the female anglerfish is the fish you’d least want to ever run into in a dark alley.  Which, coincidentally, is the only place you’d ever find an anglerfish, as most anglerfish are deep sea dwellers.

Anglerfish use a fleshy growth on their head’s as a lure for prey, that can light up in the dark.  Coincidentally, Anglerfish actually mate for life: as the male anglerfish are tiny, and upon mating, end up fused to the side of the female anglerfish (FOREVER), so maybe they might also be the most romantic fish?

Who do you nominate?