To revisit my series on non human divers; you might be surprised to learn that many species of Iguana love to swim, and that one Iguana is even quite fond of the sea- 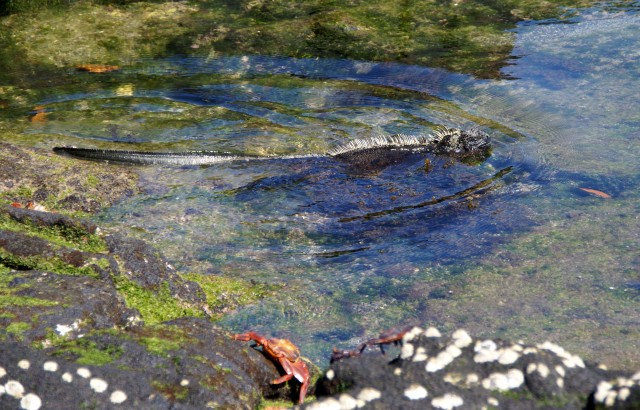 Galapagos Marine Iguanas are a little shorter than Green Iguanas, under 4 feet, with males being on average 70% larger than females. Like all Iguanas, they are herbivores, and forage in the sea and low tides for subtidal red algae.  In their case, eating marine algae is an evolutionary advantage, as they happen to live on very desolate and rocky islands in the Galapagos.

They can dive up to 30 feet and remain submerged for up to an hour, although most active dives are for 10 minutes or less. Behaviorally, the largest males are the only members of the population to dive offshore-the top 5%, while smaller males and and all females wait for the tides to go down and intertidal algae to be exposed.

As I am familiar with, after these cold water dives, Marine Iguanas become cold and risk freezing their muscles,  and must spend hours basking in the sun to thermoregulate their bodies.  During this time, they are vulnerable because their movement is limited (they are ectothermic).  However, they are known for their cranky and aggressive behaviors, and their penchant for laying on rough and rocky terrain prevents many from attempted hunting.

The coolest thing about these guys-they are adapted to removing excess salt from the ocean algae they eat.  They have a nasal gland that removes  extra salt from their blood, and they sneeze it out! This explains why they often have white salt patches on their usually dark/almost black skin. 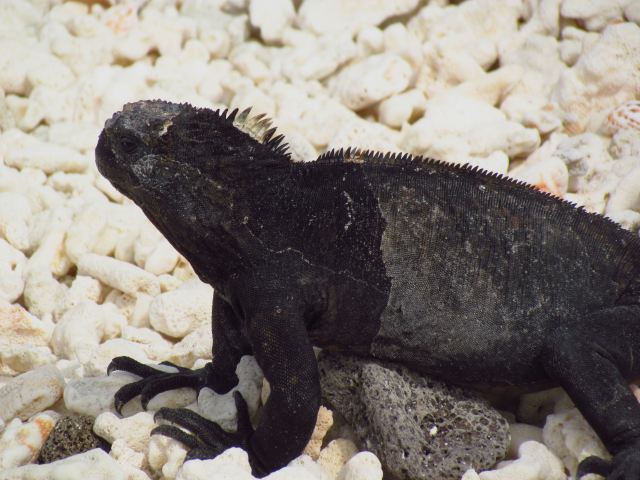